This fish-eating crocodile is native to the Indian subcontinent and is found nowhere else. It is critically endangered and is undergoing a rapid decline in population. One of three crocodile species native to India, alongside the Mugger Crocodile and Saltwater Crocodile, the Gharial is one of the longer living of all crocodilian species. 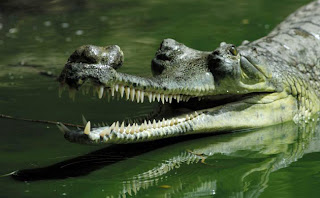 
Although male Gharial can grow up to 20 ft. (6 M) they are almost never any danger to humans, as they live on nothing but fish, a few frogs and insects. Male Gharial have a bulbous protuberance on the end of their snout, known as a ghara which emerges as they reach sexual maturity. The ghara is used by Gavialis gangeticus to alter his hissing noises as a breeding display. Vocalizations are very important to all crocodilians and they are the most vocal of all reptiles and amphibians other than frogs. The vocalizations of the male Gharial can be heard over a km away making it an essential breeding tool for these nearly extinct fossils. The Gharial's snout is highly specialized for hunting fish as it is so long and thin, filled with 110 razor sharp teeth! No Gharial has ever been recorded to harm humans. The myth that they are dangerous to humans comes from their habit of eating jewellery, however this behaviour aids in buoyancy regulation.

According to IUCN there has been a 96-98% decline in Gharial population since 1946. They have dropped from around 10,000 individuals down to a mere 235 (2006). The population has been stressed due to over-hunting for skins, egg stealing for consumption, slaughter for eastern medicine and culling by competing fishers.

The Gharial is a fascinating and unique species, a remnant of an age gone by. It would truly be a shame if we let this species disappear into non-existence. Check out the Madras Crocodile Bank, which is on the frontline of the fight for Gharial survival!

Here is a BBC clip which shows a clutch of Gharials hatching as well as demonstrates this remarkable species' aptitude for maternal care. Enjoy: