Species of the Day: Goblin Shark 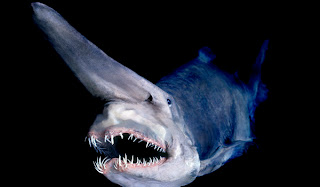 
The Goblin Shark is an elusive deep sea species of shark. This bizarre beast is found in all major oceans  up to depths of 1,300 M! These fish eaters looks intimidating but are of no real risk to humans, given how deep they live beneath the oceans surface. 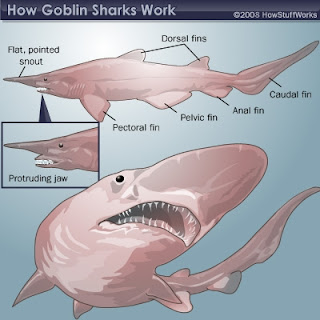 This shark is an ambush predator, being rather slow moving. It drifts towards it's prey with almost no movement letting it get within striking distance without being noticed. Once the shark is within range its specialized jaws shoot forward and grab it's prey. The Goblin Shark's jaws are able to spring forward because of special ligaments which are pulled taught while the shark has it's mouth closed. As the shark opens it's mouth to grasp its prey, the ligaments release like a catapult, shooting its jaws forward and sucking in water (hopefully with it's prey).


Here is an awesome video which demonstrates the Goblin Shark's feeding strategy: